It is difficult not to think about how late it is to write these lines to speak and honor our experience with a person as extraordinary as he was, is and forever will be José Luis Gagliardi Wakeham, our father-in-law. Let it not be later, a few lines will never be sufficient to explain how much he meant for his family, his friends, and of course his aficion, but they will be well-deserved.

Pepe Lucho began his breeding of the Peruvian horse approximately 22 years ago from the friendship of names are very important in our world of horses. Those responsible for initiating our father-in-law in a beautiful romance, such as that which he enjoyed our passion, come to light. Don Alfredo Elias Vargas and Dr. José Miguel Morales were the ones responsible for bringing Pepe Lucho into to our beloved ANCPCPP, who helped him become a splendid aficionado and breeder; when he founded his farm called “Fundo Cuatro Vientos”, it was nothing more than his most adored dream starting to become a reality.

His cousin and best friend, Dr. José Miguel Morales Dasso, gave to Pepe Lucho the mare MSCRL Bello Sueño. This beautiful mare produced offspring such as JLGW Ancara and JLGW Bello Sol. On the other hand, a la wonderful breeder and best friend, Don Alfredo Elias Vargas, left to Pepe Lucho a very important mare for his breeding programs, AEV Astria, a great dam who would come to produce important horses like JLGW Ainoha and JLGW Capricho. Apart from this great friendship of aficionados, in 1997 Pepe Lucho purchased the great gelding LV Céfiro while in bozal, who came to be a nationals champion of champions in the years 1998 and 2002. In 2004, with a lot of vision as it she was only a filly, he acquired from Mr. Luis Alfredo Malatesta the mare that would later become the mare of his dreams, his romances and ambitions within the world of our Peruvian Horse, LAM Loa.

LAM Loa deserves a separate paragraph to talk about her because for Pepe Lucho she was the horse that made him vibrate. A mare that practically never met defeat. From the classes of halter where she began a winning path that would not stop until the year 2012 when ridden by his son-in-law, she became Champion of Champions mare of the ANCPCPP national show. All that us who have been close to him will always remember that day because of the way Pepe Lucho conveyed his happiness that day was unmatched (but we’ll get to that later in this article). LAM Loa, produced and continues to produce exceptional offspring, winners of national competitions such as JLGW Loa, JLGW Primavera, JRR Agradecida, among many others that we are sure will arrive. LAM Loa not only reached the maximum title in the arena, but also, in the last national show made her mark as the High Point Dam in 2017. We are sure that under his guidance, and tears from heaven, he will always applaud the trophies and neck ribbons to come thanks to this great mare and dam that he loved so much, and today his family with a great deal of responsibility and passion, keeps her in the families breeding program.

In the year 2014, our father-in-law gave us both an order. He asked to please receive a breeding of LAM Loa, a gift for each of us. Without being able to talk much about why he wanted to give this sentimentally valuable gift, we received it with great affection and fondness. Pepe Lucho could not communicate without putting the heart in every word and express the joy that he would give his two sons-in-law who are great aficionados in this breed, to keep in their breeding programs a product of his foundation mare. It was an act of detachment that always we discussed with him because it seemed a huge and important give to us. LAM Loa had not finished giving him a considerable amount of offspring and we thought that Pepe Lucho was loosing time and wasn’t taking advantage of his mare. This is where the order came from him “take the breedings because I said so, period!”. The results of this huge gift to us were both fillies of a high quality, but more the emotional significance for us, JRR Agradecida and BCD Codiciada.

His breeding program woke up a flame inside of him. His eyes opened, the smile that overcame him when he saw the young foals. Seeing his horses achieve awards was something that he loved, but watching his young foals, full of illusion and dreams, revived him. When looking at his horses in person, he would return to his desk and pull out his piece of paper where he has names for their offspring. Then he would watch videos of them and see if the name he thought of for each one was a perfect fit. At the time that Pepe Lucho had to spend several days in the hospital, his elixir, his best medicine was to watch videos of the grown and the newborn horses. Pepe would raise his hand to ask to view photos and videos of them, he would raise his thumb, he would grab your hand and you could feel he missed seeing his horses. Despite being in the hospital the flame of the illusion for its horses and breeding only grew stronger. 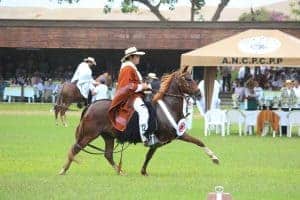 A romantic for the horse, lover of his breeding program and a dreamer for our association the ANCPCPP. Pepe Lucho did not believe that a horse of yours did not to speak of ones self. A horse could not be less than a mirror of his aficion and he always took the best care of his horses. He never skimped on their care as he always wanted his horses to be able to defend the colors of his ranch Fundo Cuatro Vientos with their heart. If a horse could not win, they would never be discarded or unnoticed, they would always be praised and treated with pride. That was a basic premise for him.

To speak of his relationship with the ACNCPCPP we cannot fail to recall the repeated calls and conversations of at least an hour, to speak of the ANCPCPP. Always concerned about the problems in our institution, but more than anything else in their future. Pepe Lucho must have asked us our opinion at least five times about whether he should run for President of the ANCPCPP and that opening of to a conversation we knew would be long talks Pepe Lucho was always happy day dreaming that it was something he wanted to do for our institution. From its application in the year 2010, our father-in-law supported entirely the “younger generation” and always wanted to surround himself with them because he believed his wealth of corporate knowledge to generate changes, you need to spirit and if that spirit came from the youth, the combination was unbeatable. Although we always told Pepe Lucho that his life had to be enjoyed, his love and joy with his horses, never dismissed the varayoc against all advice from your friends, family and even doctors. The ANCPCPP always had a very important space in his heart and mind.

The tough time comes, to talk about him. Talking about the person, the friend, fellow member, the professional, the father-in-law, the husband, the father; all characters and roles they played in our world in a splendid manner. There is no doubt when one thinks of Pepe that when 100% of the things with the heart, the places in life of anyone who crosses your path. That was our father-in-law; a person with feelings than attitudes, with more heart than interests.

We did the exercise of wondering: When was the last time you walked in Mamacona did you cross paths wtih Pepe Lucho, and when he saw you, he stopped; wearing his big hat, his warm jacket and with his cane in hand, he was looking at you (with his making 100,000 revolutions per second) thinking about what he was going to say to you to make you smile, the most sincere and loving smile that he could find in you? Today while we remember Pepe Lucho, it is impossible not to feel sad, but it is also impossible not to smile. He is our father-in-law, everyone that knew him has a wonderful memory of him, has laughed with him and he has made everyone laugh, and he has left of part of himself within each of us.

With a fascination with making people smile, putting “jokes”, scaring people, Pepe Lucho always had something good to share with you. This is very important in whom she met him, he will also recognize that in our father-in-law always had two ears and a mind that wanted to hear and help. There was no day in the year where Pepe Lucho didn’t have time for everyone, not only to advise but to feel proud of your accomplishments, to know of your life and thank God for how well you could be doing. The words family and friend never had a limit for him, and much less his love and friendship for those around him.

It is difficult to put an end to an opportunity to pay a well-deserved tribute to who was our second father, a great friend and aficionado. As we said at the beginning of this article, we will never be able to capture enough words on a piece of paper that yield real recognition deserved for such a nice person and friend. Each “leads the procession inside.” and you will remember your life around our father-in-law after reading these brief and humble words of two people who love him, who are proud to be part of his family and they miss him to die.

Pepe Lucho, your family, your friends and your horses we will always remember you and we will miss you very much. 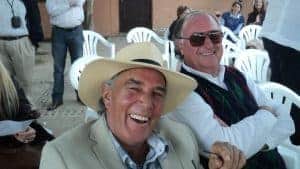 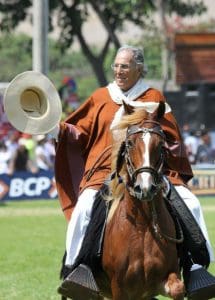 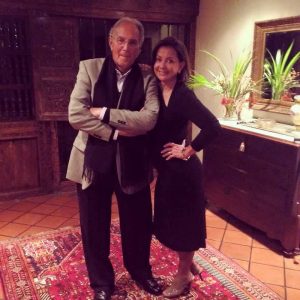 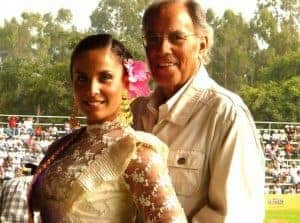 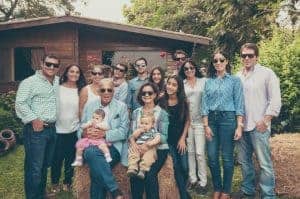