TIMES OF CHANGE IN THE PERUVIAN PASO HORSE 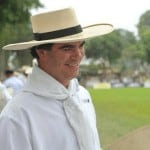 To start, I am grateful for the opportunity for letting me write in this new magazine, which I am sure will be of great promotion and usefulness to the Peruvian Paso horse in Central America and worldwide. I was asked comment on the current situation of our breed . With that, I did not hesitate to focus on five points which I have previously expanded upon in social networks that I believe will be useful for our breed to progress its current state. I will expand on each of them:

We currently do not have a lot of documentation to learn about our Peruvian Paso horse. There is not a clear order of which attributes prevail over others, or what is being sought in breeding in general terms. It was for this reason that, although many of the answers to these questions might seem obvious, there is much discrepancy between breeders. Each amateur, judge, spectator or breeder preaches different priorities on the attributes of the Peruvian horses.

Being a judge today is a heroic task and almost masochistic because of the discrepancy of criteria which does not correspond in all breeders having the same ideal animal. We cannot continue in this manner. I think that we have to have a basis and order in the characteristics of horses so any judge who delineates from the guidelines that have been established can be corrected without fear that the characteristic that they placed a higher priority on was more important than the established guidelines in judging.

I believe that this is very important so the shows can become more technical and not political as they are today. What happens in practice today, is that the judges know fully well who are adept at the type and style of judging, either by friendship, personal affinity or because their animals were awarded in a previous show. It is for this reason that the system of judging needs to be rotated, so that all the judges of the eligible list constantly judge and all can participate in polishing and unifying judging criteria. In addition, it is important that the judges not be repeatedly continuously the same show, or in the same geographic location. This may establish that the judge judges in a given year not be able to judge the same contest for the next two years to meet the criteria referenced in the preceding paragraph.

The manual of procedures is to establish the rules of the game that must exist for all categories of the show. The times, the order, the speed of the paso llano in which the horses should perform during the classes, the form of judging, shall be defined in the manual.

At present, because of the lack of established rules of the game, there are many irregularities in the conduct of classes. For example, in past competitions there have been many cases in which certain classes are shortened or lengthened, and between the lines to many spectators or competitors, there is a misunderstanding that the procedure was done to harm or to the benefit of a specific horse. On the other hand, there is also some criticism that the microphone and commentary has been used to overly praise certain participants, giving a perception of favoritism toward certain breeders, exhibitors or chalanes. That is why it would be ideal if both the judges never speak in first person or provide adjectives positive or negative toward the contestants.

This whole routine of participation, set forth in the procedures manual, must be respected in all the show arenas of the world to have an order and so that no results can be misinterpreted under favoritism or prejudice to anyone. It is time to professionalize the procedures in the competitions arena.

I must clarify that I am convinced that no one has the absolute truth between the classifications of an animal at any given time. This is why I believe that we cannot give so much responsibility to the judges who often feel extremely pressured by faulting an animal, or also with the absolute power to punish certain animals that on previous occasions have been winners. To fix this, as in other disciplines that evaluate movement with criteria of subjective interpretation, there must be an odd number of judges (between three or five). Each one of these judges will give a score to each animal and are averaged for the overall result of the category. With this alternative, the responsibility for the result does not fall into the individual to an individual judge’s criteria, but the average of all sitting judges.

Many have refuted that with this system we are rewarding the more mediocre animal of the group and I also think that this can possibly happen, but I believe this will happen in categories of low quality where there is no animal clearly superior to the rest. When I have seen extraordinary animals competing it is very difficult that multiple judges do not agree or recognize the quality of the horse.

Also, for the election of the judges, I consider it important to create a committee to review the judges who have conflict of interest of judging in certain areas or regions. Conflict of interest includes business issues, labor relations, kinship, etc. In addition, and as a final message, animals that have been sold by judges/breeders should be judged not by themselves under any reason as to not give a reason to be suspicious of placing’s.

All of the above doesn’t do us much good if we do not possess a serious body composed of independent persons who penalize irregularities in the competitions.

Judges: if classes are found where they violate the pattern in motion or they deem any horse judged that should not have been due to conflict of interest, or the judge falls outside of the judging procedure manuals and does not respect the rules, those who promote or inhibit a particular horse, they should be punished.

Exhibitors: all exhibitors should respect both within and outside of the show arena practices of good conduct in everything related to the show.

Finally, I don’t think I have the absolute truth in my ideas, but I think that any change especially in these moments will give an atmosphere of greater transparency and impartiality which is what all breeders want and need to catch up with other breeds that already made these changes and who’s positions in the horse world are much better than ours.

May we all take a step forward. It is time for a change!